Vertically Integrated Liquid (VIL) divided by the depth of the column

At each 2D horizontal grid point, the VILD is computed by dividing the VIL value by the height of the 18 dBZ Echo Top (ET) using (Amburn and Wolf 1997):

As with single-radar VILD, multiple-radar VILD was designed to “normalize” the VIL values based on storm height and is a better alternative than VIL-of-the-Day threshold practices (Amburn and Wolf 1997). Their hypothesis is that equivalent VIL values in shorter storms indicate a greater likelihood of severe hail. However, Troutman and Rose (1997) infer the reason that VILD appears to provide better hail guidance is because shorter large-VIL storms are typically associated with cold-season environments, with lower melting layers, which results in a greater likelihood for hail anyway. Better severe warning products, techniques, and methods are now recommended.

Like all MRMS products, the use of multiple radars is more robust than single-site radar alone. It provides faster updates and helps the forecaster integrate data from multiple radars. It also compensates for cone-of-silence, beam broadening at far ranges, and terrain blockage.

As with single-radar VILD, multiple-radar VILD products may show large VILDs in warm season low-topped storms even though these storms are typically not severe hail producers (the microphysics are dominated by warm rain processes below the melting level).

As with single-radar VILD products, VILD is underestimated for fast-moving and/or highly-tilted storms.

This product is derived from the 3D Reflectivity Cube, which means non-hydrometeorological data has been removed including: Ground clutter, anomalous propagation (AP), chaff, interference spikes, and bioscatterers (e.g., angels and ghosts). However, bright band contamination remains.

Sometimes still used to assess storms for their severe potential, particularly during the cool season. 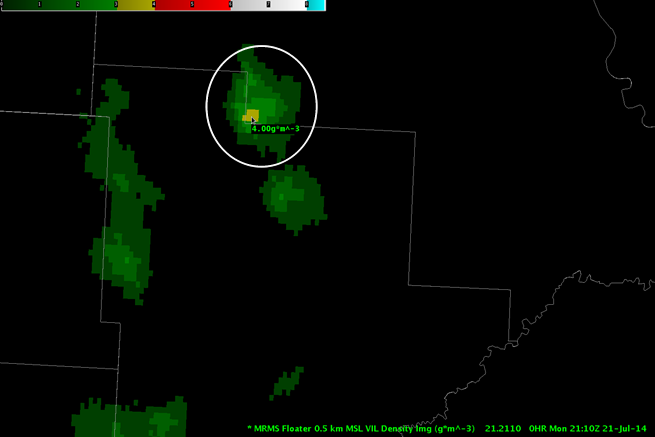 Fig. 1: Vertically Integrated Liquid Density (VILD) for a short-lived severe thunderstorm (within white
circle) over North Dakota on 21 July 2014 at 2110Z. SPC storm reports indicate 1.75-in hail was
reported near the location of the cursor at approximately this time.