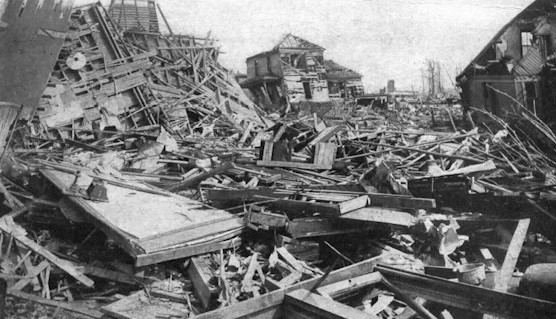 America's deadliest tornado occurred on March 18, 1925. Tracking across three states, it killed at least 695 people. The tornado was later considered to be F5 strength, the top of the original Fujita Scale for tornado intensity. 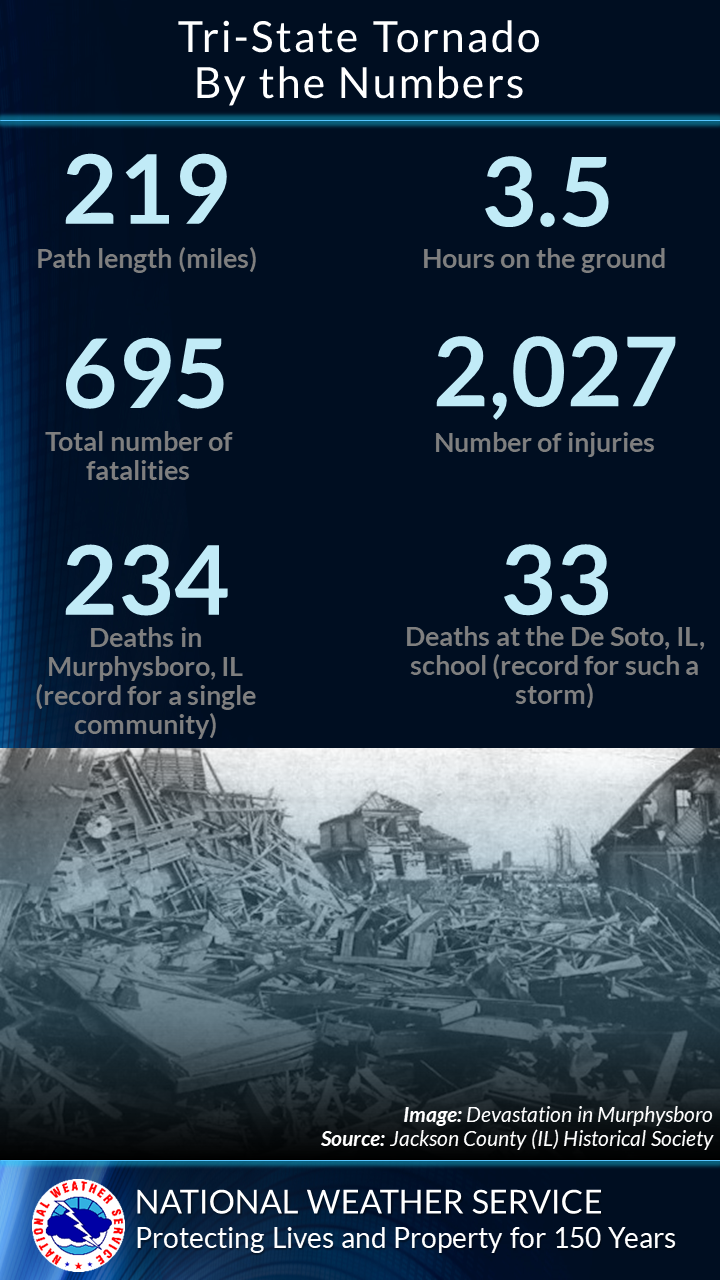 One or Many Tornadoes?

In the era of the Tri-State Tornado, storm survey techniques were more primitive than today. With no aerial surveys and limited ground investigations, tornadoes were often assumed to remain on the ground the entire time. No radars or satellite data were available to help determine the most likely locations of any damage.

The Illinois portion of the track was surveyed by Clarence Root, of the Weather Bureau office in Springfield, IL, and William Barron of the Cairo, IL office; the Indiana portion was surveyed by Albert Brand of the Evansville, IN office. Root and Barron's survey took seven days; in the March 1925 edition of Climatological Data: Illinois Section, they describe staying "as close to the storm track as roads would permit." While going into great detail on the damage along the path, no mention was made of the tornado lifting. In fact, they state: "It can positively be stated that there was only one tornado in Illinois, and that it was continuous from Missouri to beyond Princeton, Indiana."

Analyses of the event using modern meteorological knowledge have suggested potential that at least some of the track may be from different tornadoes. Noted tornado expert Tom Grazulis felt that the first 60 miles of the track were comprised of two or more tornadoes, with a 157 mile segment continuous. A more detailed analysis by Johns, et. al., published in 2013 in the Electronic Journal of Severe Storms Meteorology, was not able to conclusively determine if there were any significant gaps in the track, although the portion crossing Illinois was most likely continuous. The segment between Madison County, Missouri, and Pike County, Indiana (174 miles), was strongly suggested to be one continuous tornado, though density of the damage reports focused on at least 151 miles of it most likely being continuous.  However, the analysis did uncover some additional damage extending on either side of the original ends of the track, likely caused by separate tornadoes.

What If It Happened Today? 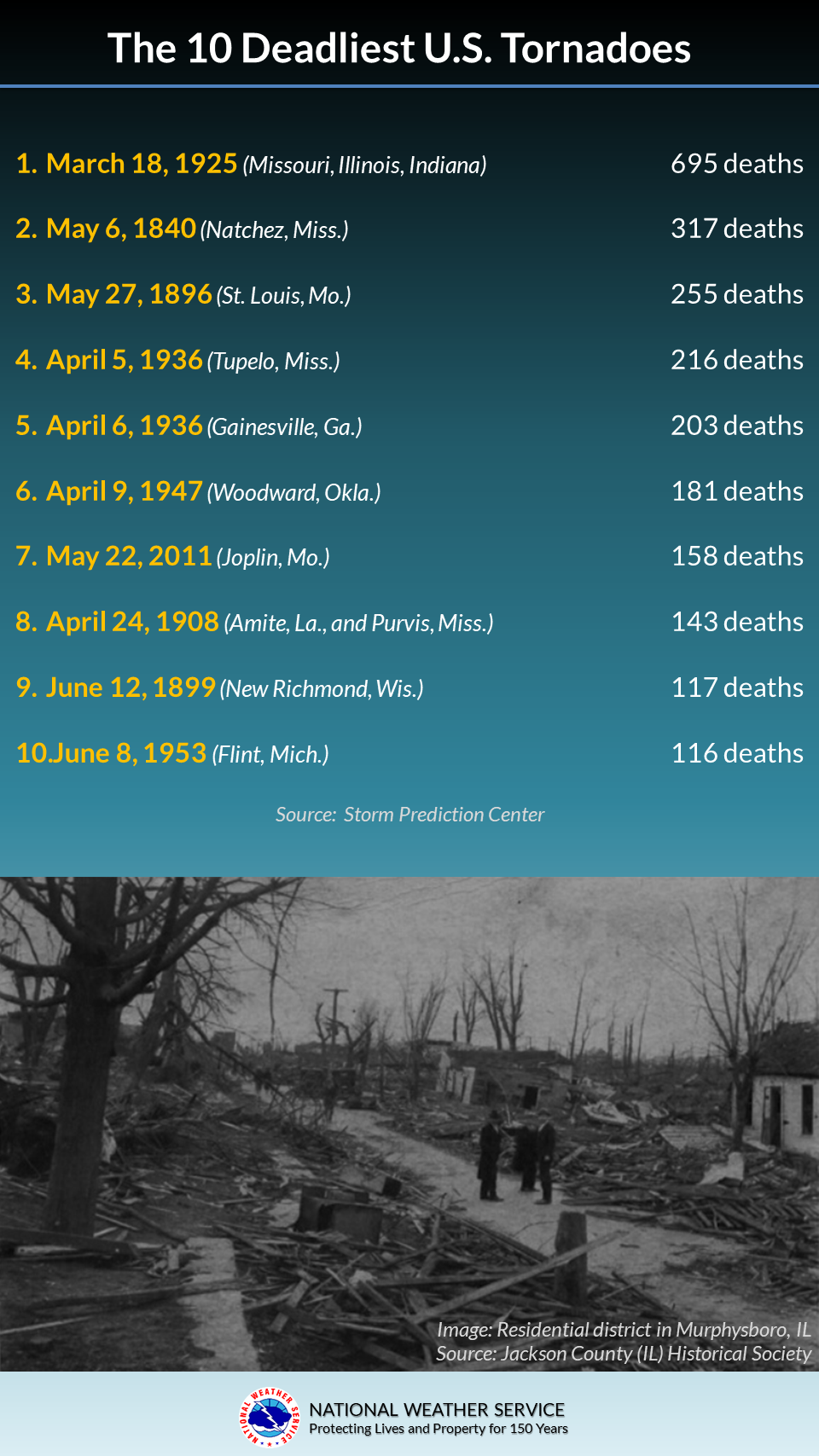 The tornado struck in an era when there were no severe weather watches or warnings. Indeed, the Weather Bureau had a policy not to even use the word "tornado" in any forecast, to avoid inciting panic. The official forecast merely called for "rains and strong shifting winds."

The Paducah, KY, NWS office worked with the Storm Prediction Center to create a hypothetical scenario for this storm:

Outlooks from the Storm Prediction Center would have highlighted the areas of concern. Using a reanalysis of observed weather data from the era, a High Risk for severe weather would likely have been included.

Around noon, a Tornado Watch would likely have been issued for southeast Missouri, southern Illinois, southwest Indiana, and portions of adjacent Kentucky.

As the severe storms began to follow, local NWS offices in St. Louis and Paducah would issue Tornado Warnings. Given that the tornado was moving from 60-70 mph over much of the path, warnings would have to include multiple counties to get advanced notice. The link above for the scenario includes the text of these hypothetical warnings.

Thank you for visiting a National Oceanic and Atmospheric Administration (NOAA) website. The link you have selected will take you to a non-U.S. Government website for additional information.

NOAA is not responsible for the content of any linked website not operated by NOAA. This link is provided solely for your information and convenience, and does not imply any endorsement by NOAA or the U.S. Department of Commerce of the linked website or any information, products, or services contained therein.

You will be redirected to: